Home » Academic Affairs » Meet the Provost
In this section 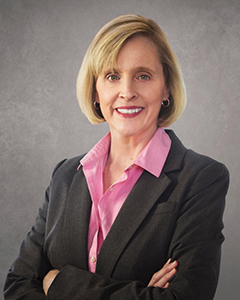 Shortly after earning her bachelor’s degree in marketing from Bowling Green State University in 1987, Cronley embarked on a 10-year corporate marketing career, leading communication and marketing efforts for companies such as Chase Manhattan Bank, BMA Technologies and Legent Corporation. Cronley left the corporate world in the late 90s to pursue her Ph.D. in marketing from the University of Cincinnati’s Linder College of Business. She earned her doctorate, with a focus on consumer behavior and social psychology, in 2000.

Cronley’s first academic job took her to Wright State University, where she served as an assistant professor of marketing for the school’s Raj Soin College of Business. An avid researcher and teacher, she moved to Ohio’s Miami University in 2002, where she spent the next 14 years in numerous academic and leadership roles, including professor of marketing, senior associate dean for the Farmer School of Business and Senior Associate Provost for Miami’s Office of Academic Affairs.

In 2017, Cronley was named provost and vice president for academic affairs at Ohio Northern University. During her tenure, that university experienced consecutive years of enrollment growth. She developed a student success center and a center for faculty excellence, and she worked with the College of Pharmacy to establish a retail pharmacy and a medical therapy call center on campus.

During her academic career, Cronley published more than 30 articles in journals and books, co-authored the textbook “Consumer Behavior,” and received numerous grants, awards and nominations related to her scholarship. She also attended the American Academic Executive Leadership Institute, the Harvard Leadership Program’s Institute for Education Management and the HERS Institute – a Women’s Leadership Institute at Wellesley College.