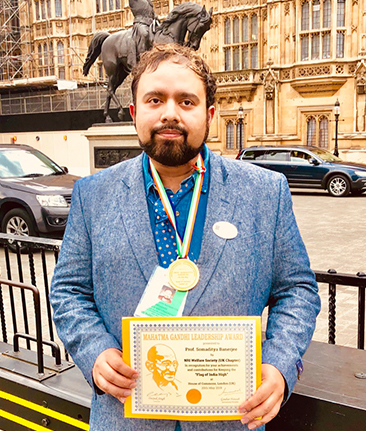 “I have a passion for empowering students to become independent, responsible thinkers who are well prepared for careers and a lifetime of learning.” Dr. Banerjee on what he looks forward to in his interactions with students

Somaditya (Soma) Banerjee has a bachelors and masters in physics, completed graduate work in history of science and technology from the University of Minnesota and finally earned his doctorate in history from the University of British Columbia. Soma's research interests are in Modern South Asian History and History of Science and he is completing a book manuscript (under contract with Routledge Press) which examines the making of modern physics in colonial India. He has participated in several national and international conferences and received several institutional research grants and awards. He also reviews book manuscripts and journal articles for various publishers. He is the Faculty Advisor for Phi Alpha Theta (which won the best chapter award in 2019 for the 11th consecutive time), History Club and the newly created India Club at Austin Peay and currently teaches Early and Modern World History, Historical Methods, Modern India, Mughal India and History of Science.

At Austin Peay, Banerjee is also the Secretary of the Faculty Senate and a member of the Hispanic Cultural Center Advisory Committee and the Adjunct Committee. His mentees are in various graduate programs at Harvard, Yale and Emory. Soma is also on the Membership Committee for the History of Science Society and contributes as a member to the Forum for the History of Science in Asia.

For a list of Dr. Banerjee's publications check out his Google Scholar profile.