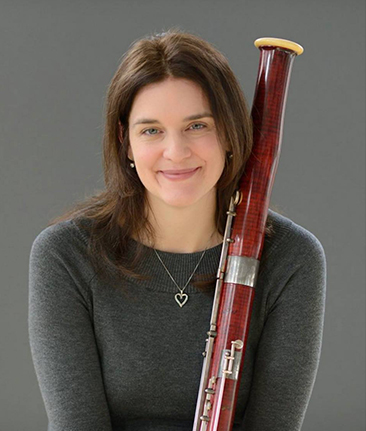 “Being part of a faculty that truly cares and is passionately dedicated to helping students improve their lives makes this a rewarding place to work.” Dr. Gillick on what she enjoys about her interactions with students.

Dr. Gillick has led the double reed studio at Austin Peay State University since 2016. She is committed to commissioning new works for double reed instruments, the art and science of reed making, innovations in music pedagogy, and exploring concepts lying on the intersection of arts and technology.

Dr. Gillick regularly leads reed making master classes and gives recitals throughout the country. In the summertime, she has taught at many renowned festivals, including the Idyllwild Summer Arts program in California, and the Summer Music Institute in Roanoke, Virginia.

Equally accomplished as an orchestral and chamber player, she has performed with the Nashville Symphony, Gateway Chamber Orchestra, Roanoke Symphony Orchestra, the Bakersfield Symphony (co-principal), and the Santa Monica Symphony. Other orchestral engagements have included the Pasadena Symphony, Long Beach Opera, among numerous other ensembles in Southern California. She has also performed chamber music as a member of the faculty quintet at Azusa Pacific University and the Santa Monica Symphony Wind Quintets. Additionally, she competed at the Coleman competition with her quintet from CSULB.

An active member of several professional musical organizations, Dr. Gillick has been selected to present lectures and recitals at International Double Reed Society Conferences in Tokyo, Japan and Granada, Spain. She is an active member of both IDRS (International Double Reed Society) and CMS (College Music Society) and frequently performs and presents her research at conferences for both organizations at the regional, national, and international level. Dr. Gillick has participated in the Fairbanks Summer Arts Festival (with Loren Glickman), and the Aspen Music Festival where she studied with Steven Dibner, Nancy Goeres, and Per Hannevold.

Her past teachers include Charles Coker, John Steinmetz, David Muller, and John Campbell. She has additionally studied saxophone with Leo Potts and Doug Masek. Amy has been selected to perform in master classes with Milan Turkovic, Michael McGraw, and Ben Kamins, among others. She earned her B.M. degree from California State University, Long Beach, and M.M. and D.M.A. from UCLA.

Dr. Gillick is committed to commissioning new works for bassoon, the art and science of reed making, innovations in music pedagogy, and exploring concepts of an interdisciplinary nature. Her interest in the works of Brazilian composer Francisco Mignone, about whom she wrote her dissertation, continues to inspire translations, transcriptions, and future projects.